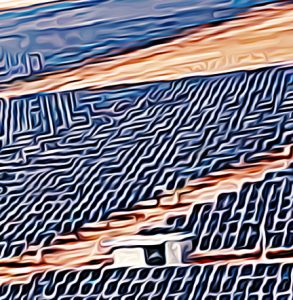 Dr Dark McBane had just called for Project Bender to be brought forward, so once Vai had brought her to the wall, Maphira turned her attention toward the nearest door.

Contrary to her expectations, Project Bender did not come from the door. Instead, a massive grinding sounded from below ground, as the floor of the strange auto theatre began to shake. A circle opened up, a platform rising from beneath it. On that platform stood a statue made of metal, depicting an android of some sort. Project Bender had great mechanical wings on its back, currently folded inward.

The statue came to life, stepping forward with jerky movements. It was no robot that could ever pass for a real human, but she suspected that was far from its intention. With its glowing red eyes and wicked smile, Maphira knew this would be a tool of fear only.

“Director Vai,” said Dr McBane I would just like to confirm that you completed many different 30KW solar system installations, correct? A single, larger system could spell disaster for the test.”

“Yes, doctor, that is correct.”

Others might not have noticed it, but Maphira knew Vai well enough to pick up on the way she hesitated before speaking. She’d cut corners with that request – no doubt about it. Better for Maphira’s purposes, for sure.

“Excellent,” the doctor said. “I would like to remind everybody that commercial energy management is no simple task. This project has been months, if not years, in the making, and it is only thanks to the hard work of our entire energy division that we are here to witness this glorious event today. Now, without further ado, I shall explain what is going to happen here.”

So, this was it. The moment Maphira would learn all about Project Bender. Once the doctor was done with his exposition, she’d just have to figure out a way to escape with the information.

One way or another, the Resistance was going to find out what was going on here.