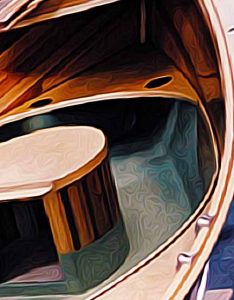 The blonde boy had hooked his fingers into the rope and was hauling himself onto the boat. Lorcan watched with barely concealed jealousy. He doubted he could follow either as swiftly or gracefully, yet he knew he couldn’t simply stand and watch as the boy tore up months of the vikings’ hard work. These boats were an example of the best marine fabrication Melbourne had to offer, completed by one of the greatest steel fabricators of all time. That same man had been lost in the previous battle. There was no way for his genius to be replicated if the blonde boy somehow destroyed the fleet.

Lorcan took another step forward. To his left, Erik flung his arm out, stopping Lorcan in his tracks. “What are you doing?” Erik asked sharply.

Lorcan opened his mouth in indignation. “We have to do something!”

Erik shook his head. “They told us not to touch the boats.”

Had Erik been hit in the head with a ram’s horn? All Lorcan wanted to do was stop the blond boy from tampering with the boats. How could the others not see that? With a flash of strength Lorcan didn’t know he possessed, he shoved Erik aside and sprinted to the shoreline. Even the sand seemed to be trying to stop Lorcan in his tracks, sucking at his boots and dragging him backwards. But Lorcan was determined. The boat catch installation was almost in his grasp, and if he simply locked it, then the boy would not have the chance to cut himself free from the docks.

The boy swung his head around, blonde hair whipping across his face in the wind. He grinned, tugging firmly on a rope, and it fell free from the mast, coiling onto the hull like a snake. “Come to join the fun?” The boy asked, laughing.

The wind roared in Lorcan’s ears. He steeled himself, filling his voice with more courage than he felt. “I’ve come to stop you.”