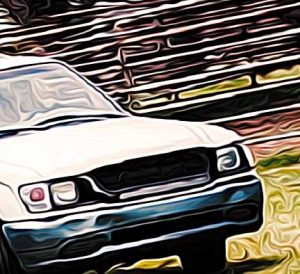 ‘Can I be honest?’ I asked my husband, standing next to me in the driveway.

‘No good conversation has ever come after that question,’ he frowned.

‘It’s just… I have no idea what I’m looking at,’ I shrugged sheepishly.

‘It’s my new ute!’ he said with a grin, splaying his hands in front of it like he was a travelling magician.

His arms dropped and his grin slipped a little bit. ‘But it’s… it’s new,’ he pouted.

‘How is it any different to the old one?’

‘How is it–’ he shook his head like he was trying to wake himself up from a bad dream. ‘How is it different?’

I nodded, putting my hands in my dressing gown.

‘Well,’ he started, frowning. ‘I guess there’s the, uh… it has an extra cupholder!’

He began to walk all around it, trying to justify to himself and to me why he’d spent so much money on a new car.

‘Ah!’ he cried out triumphantly. ‘The tray!’

‘The tray?’ I asked, coming around the side to stand next to him. ‘What’s so special about the tray?’

He reached down and grabbed a handle next to his wheel, sliding a toolbox out from underneath the tray.

‘Ah,’ I nodded, trying my best to be impressed.

‘It’s tapered,’ he explained. ‘It’s a tapered tool box to fit under the tray.’

‘Sweetheart, we’ll be here all night if you don’t let me lie to you at least a little bit.’

He frowned, putting his hands on his hips – an actual pout, I realised. My grown husband was pouting at me.

‘Do you know where to find quality ute trays around Melbourne?’ he asked.

‘Well it’s hard, okay!’ he stamped his foot, walking back to the house.

‘Wait, sweetie,’ I called after him. He stopped and looked back at me.

‘You forgot the bins.’