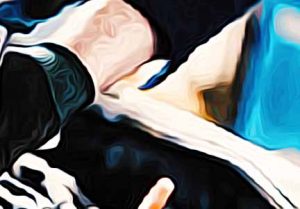 They led her to a strange theatre at the back of the auto shop, like a medical theatre where people could watch the procedure except for car repairs instead of surgery. In the seats above her, she spotted a man in dark robes with a gold mask depicting an elephant, along with a few lesser-looking Conclave members. She assumed the masked man would be the Great Mechanist Vai had spoken of – the leader of the Conclave of Mechanists.

“Bring the test subject forward,” said a man who stood by a computer. “Let’s get Project Bender underway. It is time for my child to take flight.”

Dr McBane, the once-Premier of Victoria? He was the Conclave’s top scientist behind this project? Already, Maphira had learned a great deal. She had to see this through, though. What else could they reveal to her in their arrogance?

“Put her against the wall there, with the chains on, please,” said McBane. “This is no simple car air con regas being done here today. No, it is much more complicated than any mechanical work. Now, bring out Project Bender!”

As they led Maphira toward the wall, she grabbed her radio piece and put it in her ear, ensuring her hair covered it up well. Set to Mr Chowski’s broadcast, which was currently just playing classic tunes, she was ready for whatever the Conclave could throw at her.

And now, finally, she’d get to see just what this Project Bender was all about. With any luck, maybe she could stop the whole thing before it even got started.