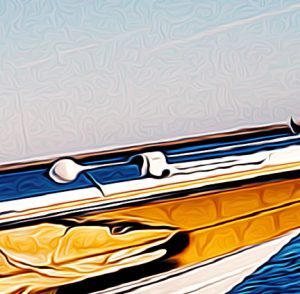 Before I can react, a hole opens on the underside of the ship. There’s a scraping sound, and a thin metal claw unfurls and drops a net over me. I’m trapped. I scream and thrash, but it only seems to dig the grooves of the net deeper into my skin. Even as the metal claw retracts and I am drawn into the belly of the ship, I can hear the gasps of the mermaids still cowering on the coral fields. None of them reached out to help me. They wouldn’t dare to.

This sort of sailboat print design hasn’t been seen in centuries, but everybody knows the legend of the giant squid. This ship belongs to the humans who almost single-handedly brought us to extinction. And I have just been captured by them. When the hatch slides closed beneath me, I am plunged into darkness. I start gasping for breath. I’ve never been above the surface before, so this is the first time I’ve ever breathed ordinary oxygen. Suddenly, rough hands draw me upright and a tube is shoved over my face. Fresh water floods my lungs. Now that my most immediate problem is taken care of, I gather the courage to look up.

Around me stand five humans, all with identical looks of shock on their faces. They each wear coats with the same giant squid design that is painted on their boat wrap vinyl. I’m not sure what to do. I can’t move my arms because of the nets that surround them. My fins won’t work without water. Instead, I simply stare at the humans, hoping that the expression on my face appears braver than I feel. One of them has some sort of timber and metal contraption that I’ve seen littered on the marine floor before. A knife? They reach out and use it to saw the net off my body. With my arms freed, I growl and rub at the welts on my skin. One of them smiles sadly and apologises to me. Then, I am shoved into a chair.