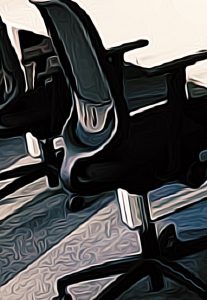 ‘I just don’t know,’ Arlov sighed, shaking his head. ‘Has anybody else ever said yes to this proposal?’

‘Oh yeah,’ Ollena smiled, wiping the sweat from her brow as casually as possible to avoid showing how nervous she was. ‘Plenty of people.’

Arlov stood up from the table, sending his chair skating backwards. ‘Thank you,’ he said, curtly. ‘I’ve had a lovely time.’

‘Wait!’ Ollena threw herself over the corner of the table, rushing between him and the office door. ‘I promise, this isn’t as dumb as it sounds! It’s the latest trend in commercial office design! Melbourne is practically bursting with them!’

‘Miss Baborovich,’ Arlov leaned in. ‘We aren’t in Melbourne, are we?’

‘Are you sure?’ Ollena tried, feebly. ‘There’s so much snow out there, it really could be any city.’

Arlov allowed himself a tight grin, then reached for his hat and jacket by the doorframe. Striding towards the elevator bank, he adjusted his hat. Dashing inside the waiting car, he turned back to Ollena.

‘Dammit!’ Ollena growled to herself.

‘No luck?’ her assistant piped up from where he’d been hiding.

‘That’s the spirit!’ he grinned at her. ‘Someone will recognise your genius soon enough!’

Ollena rolled her eyes. She turned and gestured at the display office they’d set up. ‘Not before this place sends me into debt!’

She leant against one of the large, moveable walls set up in a row in the middle of the room and sighed.

‘Cubicles,’ she whispered to herself. ‘What a dumb idea. Who’s ever going to want to put cubicles in an office?’