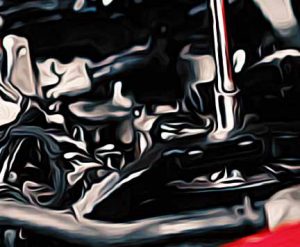 ‘Why did you want to meet?’ Gordon asked, wrapping his coat around himself as the winter air swept through the open building. He remembered when this area had been a thriving development – now it was a graveyard of abandoned construction, graffiti and men meeting on rooftops at midnight.

‘I have a lead,’ came the gravelly voice of his companion from the shadows.

Always from the shadows.

‘What sort of lead?’ Gordon frowned, having long since given up trying to see the other man’s face.

‘His car,’ came the growl. A pair of keys flew through the air and Gordon snatched them before they hit the ground. ‘It’s European.’

‘European cars require specific maintenance,’ the shadowy figure went on. ‘Good mechanics – not easy to come by in Goth Ham.’

‘Are there any mechanics that work on European cars near here?’ Gordon asked.

‘Just one,’ the figure said. His cape swished as he turned to point at the city skyline. The move gave Gordon vertigo, but he pushed it down.

‘A decent mechanics,’ the man in black said. ‘I know – I was surprised too.’

‘You sure they aren’t running something on the side?’ Gordon asked warily.

‘Yeah, but they could be selling anything from–’

‘I checked,’ the man repeated. Gordon shrugged, pulling his jacket in tighter again.

‘So they just do work on European cars?’

His companion shook his head. ‘No – can’t imagine they get enough business in a city like this.’

‘What else then? Just regular services?’

‘That, and they advertise as an auto electrician. Seaford used to be their base of operations.’

‘Explains a lot,’ Gordon murmured. ‘So we split up – divide and conquer. I’ll interview this mechanic, see what he knows about that car…’

He trailed off, looking around the empty rooftop. Sighing, he took his glasses off and rubbed the bridge of his nose.