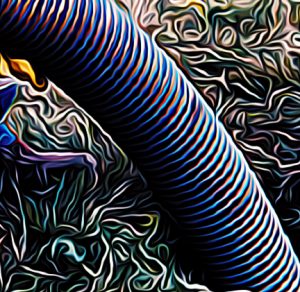 Through the oppressive darkness of New Hobart’s sewers, Charlie spotted a figure in white up ahead. It was hunched over, snatching at something just at its feet.

They’d travelled for almost an hour through the sewers, seeking dark little creatures that had taken a large chunk out of the Ivory Skull’s numbers. It was time for some revenge. Could this figure be one of the two foes they sought?

Right then, they were travelling along a tunnel adjacent to an infamous blocked drain. Oakleigh Road’s terrible drains had become a nightmare for the entire city, but dealing with those would have to be a problem for another time.

Charlie sent four members of her strike team down another tunnel. Although the instructions recommended they continue until the series of blocked drains around Thornbury Drive, she figured the tunnel would meet back up with them. If this really was one of the Little Men, better to flank the creature.

They approached through the darkness, attempting to make not a single sound. As they drew within fifteen feet of the figure in white, it slowly glanced up at them.

The creature wore a mask that covered its entire face, depicting a snake’s head. Through the eye holes, Charlie could see only dots of yellow. It stood a handful of feet tall. She’d seen one of the Little Men before, back when the monsters had attacked Fort Cambridge and the Brighton base for the Ivory Skull.

There was no mistaking it. This was, indeed, one of the Little Men.

She didn’t think; just charged forward, spraying projectiles like a madwoman. She had friends to avenge, and dammit, she was going to get justice for them today.

The Little Man was too quick for her, dodging out of the way and sprinting for the wall of the sewer. As if he defied gravity itself, he ran along the edge, headed straight for the rest of her team.

And that was when Charlie spotted the second of the Little Men behind her squad. As it turned out, they were the ones to be ambushed.