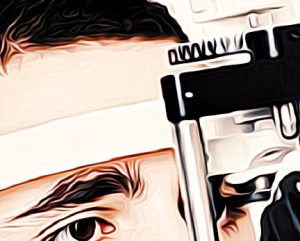 Abrahab sighed, running his fingers through the two-week growth of his beard. He normally liked to keep his face cleans-shaven, as befit an officer, but water was ironically scarce this far under the sea.

‘What’s their position again?’ he barked at the first mate, who dutifully ran to the transparent whiteboard, covered in lines and longitudinal equations.

‘Four klicks off our bow, sir,’ he called back.

‘Four klicks,’ the captain muttered to himself, fingers slowing in his beard. ‘Heading?’

‘Change course by twelve degrees, see if they match us. And Reginald, a private word if you please?’

The first mate nodded, relaying the appropriate instructions to the bridge crew.

‘Sir?’ he asked quietly, joining the captain in his private chambers.

‘Why are you squinting?’ the captain asked abruptly. ‘Is something wrong with your eyes?’

‘I could read that board from over here, easy as a kid’s eye test. You had to squint right next to it.’

‘I guess it might just be a little dark in here, sir,’ the first mate grinned nervously.

‘Well, that’s what the spooky red lights are for,’ the captain frowned. ‘I need you to tell me if your eyesight is poor, son.’

Reginald mulled it over, taking a deep breath. Finally:

‘Most of my life. Used to be that just one of my eyes was bad, so I could still pass all the tests, but now the good one is going too.’

‘I see,’ the captain nodded. ‘That’s a real shame, corporal. When we get to dock, we’ll find you an affordable optometrist. Brighton, maybe?’

They both turned as a klaxon sounded on the bridge and the lights began to pulse.

‘Captain!’ a crewman hollered. ‘They’re picking up speed, heading right for us!’

‘Oh shoot,’ the captain swore. ‘Forgot about the bloody sub!’